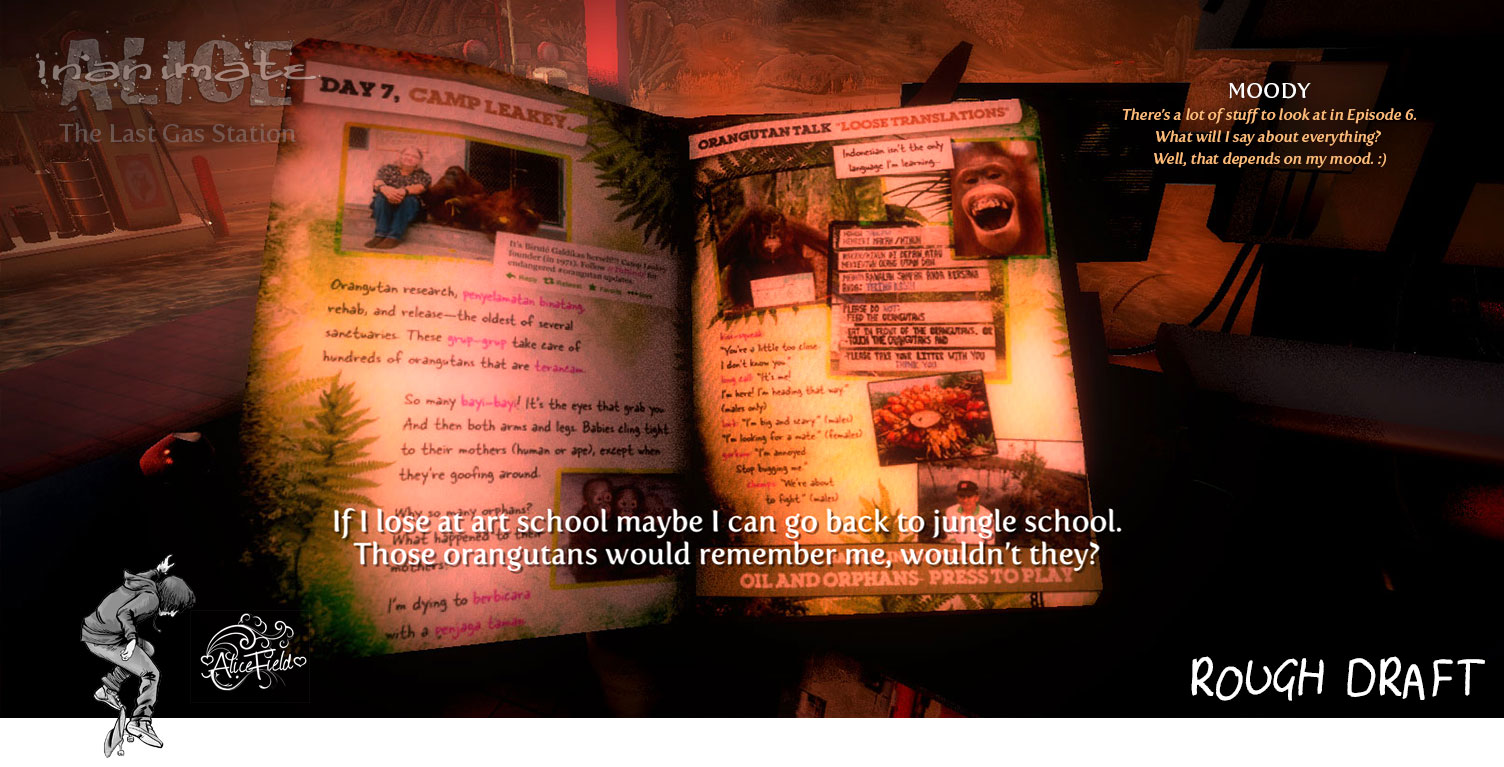 I’ve been playing with the idea of spatial narratives (heh, that sounds posh!) – elements of thoughts/dialogue that are tied to zones, objects and happenings in 3D space. I’m really interested in the idea of each reader/player having a slightly different experience each time they play Episode 6.

I don’t mean like, making endless branching narrative possibilities or anything – I don’t think my head could cope with that – but having varied, perhaps even random or mood-related responses to the reader/player’s actions as they play the role of – well, me, as they go through the story.

Here are a couple of ideas I’ve been exploring:

1. Random responses. Basically, this method triggers a random but very similar response to so mething that might be happening or has been discovered. Here, I’m reflecting on arriving in the subway. It doesn’t matter which one of these responses appears on screen, they’re not absolutely “key” narratives as such, but they do add a slightly different “flavour” to each gameplay/story session. Let’s call it “seasoning”. 😉

2. Incremental responses. Rather than being random, these kinds of responses count “how many times they’ve been triggered” and display my thoughts accordingly. For instance, let’s say I decide to pick up an old crate that I find lying around in the subway. My first response might be, “OK, a crate. Weird. What can I do with this?”. The second time I pick it up, my response might be different. “Yep. It’s that crate again. Don’t all video games have crates?” And so on. Eventually, I might get sick of repeatedly doing something and display a sarcastic/tired comment. Or, offer a clue as to what the object is meant to be actually used for.

3. Game state dependent responses. These sorts of thoughts and reactions depend on what’s happening in the game as a whole. Is there any urgency or pressure on me/the reader/player to do anything? If so, I might be more moody/snappy than I would be if the pressure’s off and I have plenty of time. My response to just standing about being idle might be, “Er… shall we get moving then?”. If the story has become time-pressured or dramatic, this might switch to: “OMG I NEED TO MOVE! NOW!”.

4. Branching responses. What happens narratively might also completely depend in places on what the reader/player has decided to do in my shoes. These are the Big Decisions and require the entire episode to wander off down different “story paths” – possibly even have different outcomes. Did I take the left hand corridor or the right hand one? You never just know: the entire story might change, depending on that one single choice!